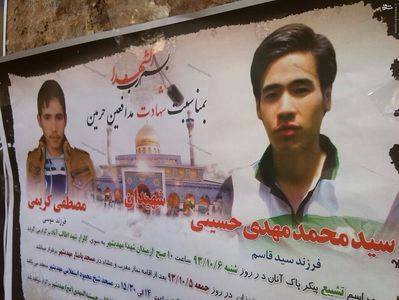 A commander in the Iranian IRGC was announced today as killed in Syria. Iranian media sources said Sayid Ahmad Quraishi was wounded few days ago in Syria and was moved to Tehran where he died in the hospital on Saturday.

Regime’s Supplies Minister Talal Barazi visited Hama governorate to explain to local supplies officials the new pilot government plan for distributing bread to citizens. The minister said according to the plan each citizen will get one pack of bread in two days, adding that the pilot plan will be applied in Hama, Tartus and Latakia before applying it to all other regime-held governorates.

Regime forces fired heavy artillery on the village of Bdama in western Idlib. A woman and a child were reported wounded.
Regime forces bombed with rocket launchers and artillery six rebel-held villages in western Hama area. There were no reports of casualties as most of the villages are empty of their population.
Not far from western Hama, Russian warplanes bombed rebel-held Kbaini mountain area in northern Latakia.

From its positions in Afrin, Turkish army bombed SDF-held towns of Mara’anaz and Tal Rifa’at in northern Aleppo. The bombing left damage in infrastructure.

On the other hand, the Turkish army fired on late Friday night a light bomb towards the village of Dadra near Tal Tamr in northern Hasaka.

American army sent reinforcements to its base in Shaddadi in southern Hasaka. According to the regime’s news agency SANA, the reinforcements included supplies, munitions, logistics and some soldiers who were hosted in building number 11 of the residence area of the Aljbese gas facility.

On another hand, SDF announced the killing of two of its fighters in Hasaka on July 19 and 21. One of the fighters was killed in combat against ISIS and the second while fighting against the Turkish forces, according to Kurdish media sources.

Syria Daily: One Child Killed in a Russian Strike in Idlib

Syria Daily: One Girl Killed in the regime Shelling of Idlib